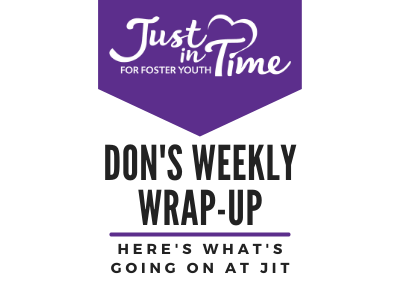 Just in Time for Foster Youth was recently awarded a grant from Bank of America! The grant is supporting our women’s empowerment service, Career Horizons. Thanks to B of A’s support, we will continue connecting youth to female professionals and entrepreneurs in the community, making their voices heard and providing the guidance and relationships needed to thrive personally and professionally. 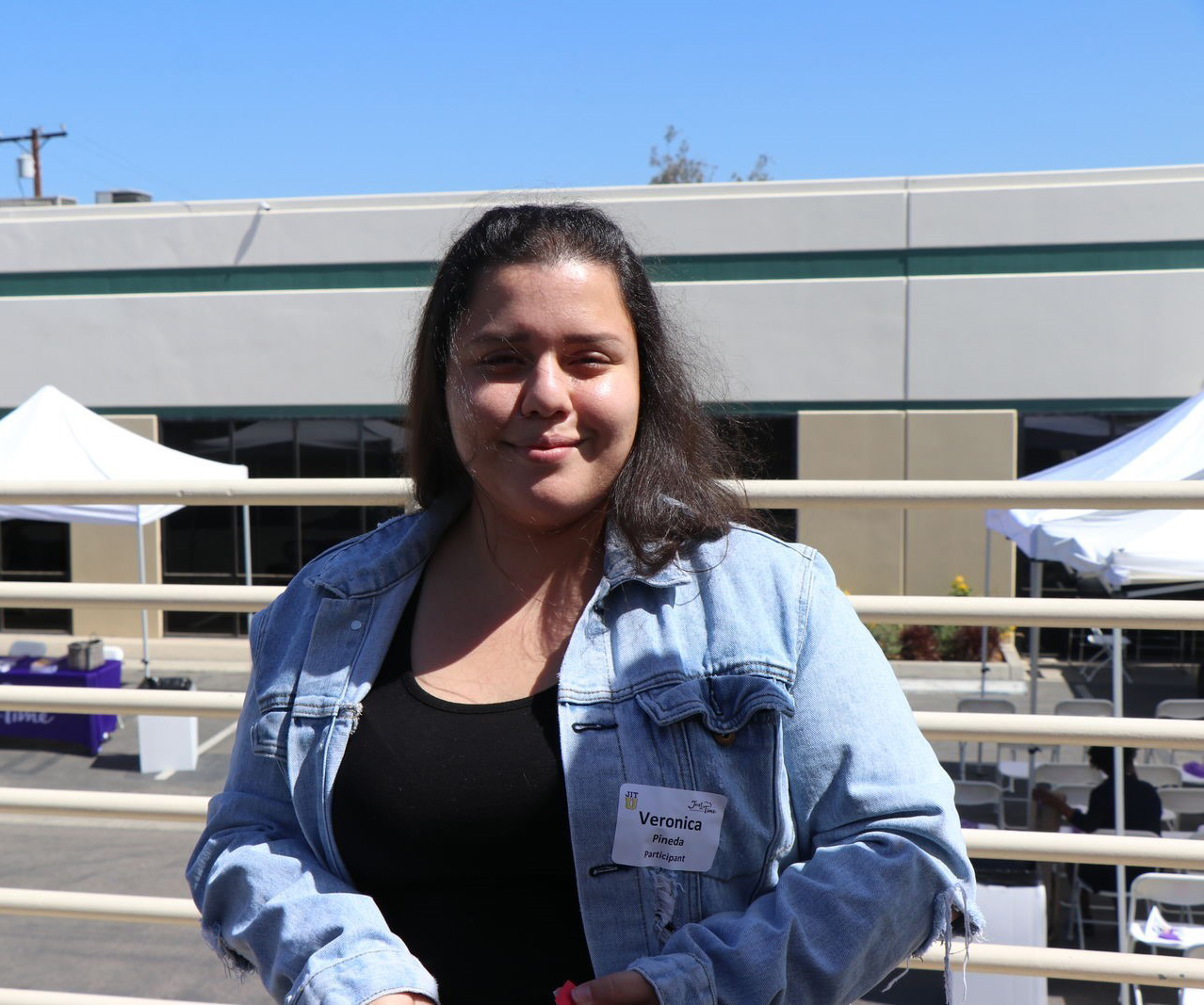 The Spirit to Succeed: Veronica’s Story

Veronica was in the foster care system in Los Angeles from ages 12 to 18, bouncing around eight different homes. School was one of the most consistent things in her life so when she turned 18, she wanted to get a college education. Unaware of any resources to support youth in transition from foster care, she worked full-time while going to school, building up debt along the way. “I didn’t know how to manage finances,” she shared, “I just knew I needed to make rent and go to school.”

At 21, Veronica moved to San Diego, determined to continue her education but not sure where to go or who to turn to for support. That’s when a woman named Lee changed everything for her. Lee was a coordinator for ACE Scholars at Cal State San Marcos, a comprehensive program at the college that supports former foster youth. Veronica finally had some resources and decided to study to be a nurse. However, she failed her classes her first semester. “I went into a depressive state,” said Veronica. “There was no one to support me.”

But Veronica did not give up; instead she changed her perspective. She decided that while nursing wasn’t for her, she could find a different career that allows her to pursue her passion for helping people. And through ACE Scholars, she was able to get housing, which removed some of her financial worry and allowed her to focus on her dreams. Her determination paid off, and Veronica graduated with a bachelor’s degree in sociology last December. Now she’s pursuing her Master in Applied Behavior Analysis, working to become a Board Certified Behavior Analyst – and she has a 4.0 GPA so far!

Veronica also found Just in Time while she was looking for resources and advice before starting her master’s program. At first she was hesitant to be associated with JIT,  looking at  her identity as a former foster youth as something negative. However, as she got more connected, her view began to transform. “I learned that I need to embrace my past and who I am as a person,” said Veronica.

She quickly immersed herself in our community of support and went on to utilize the essential services that we provide. She began with My First Home to furnish her place; then College Bound and Master Your Dream to equip her with a laptop, printer, and financial support to help her through the next phase in her educational journey; afterward she received help from Basic Needs to keep food on her table during an emergency; and now she’s exploring Financial Fitness to help her take control of her finances and Rise to Resilience to improve her mental health and overall well-being. Through each of these services, Veronica found that she was surrounded by a community she didn’t realize she needed.

“I’m just so thankful – I was able to furnish my home and so much more,” shared Veronica. “There’s a whole support system I have now. I don’t have parents to rely on, but now I have someone to talk to and there’s so much stress taken off of me. Just in Time has made it possible to live my dreams.”

Support for Veronica’s dreams couldn’t have come at a better time, as she recently received some life-changing medical news when doctors identified a mass in her brain. She is currently consulting with a neurosurgeon to determine next steps and treatment, but she hasn’t let her new diagnosis defeat her.

“I don’t know what that’s going to look like for my future. But this is not going to stop me. I’m just going to keep on going. I know I’m eventually going to reach my goal,” said Veronica, adding “I’m a beautiful human being, more than I ever realized. I’m just thankful and ready to show people that you can do it.”

When asked how the JIT community can support her, Veronica shared, “It’s the connections I really want to make, and just bond with people,” adding that she’s overcome so many struggles already and she can continue to do so with the right people behind her. She also aspires to give back and become an advocate for those who have spent time in foster care. We look forward to continuing to support Veronica’s dreams however we can and being a community she can rely on. 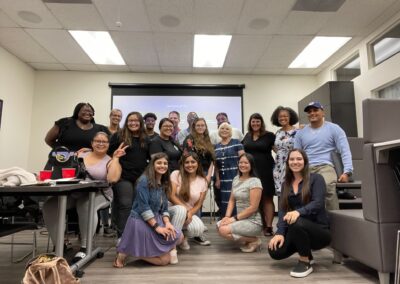 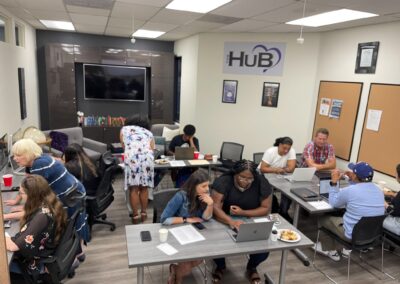 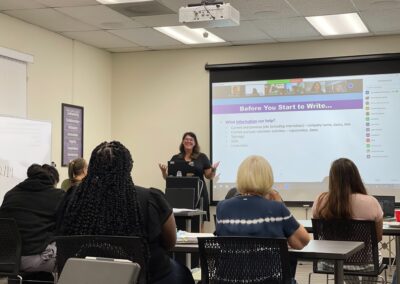 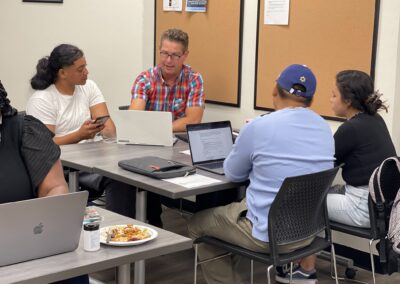 In the first hybrid workshop of 2021, Pathways to Financial Power and Career Horizons for Young Women launched a Resume Building workshop. There, the participants learned the key components of building their resumes by leveraging their strengths from StrengthsFinder assessments, understanding the do’s and don’ts of resumes, and learning how to use cover letters to fill any resume gaps.

Our team pioneered the first ever hybrid workshop that allowed participants of all comfort levels to engage and learn with our community from both inside our office and their homes.

JIT staff Sanam, Nina, and Ren collaborated to make sure the facilitator, Sara Welker, and the participants were set up and ready to go for the in-person aspect of the workshop. For those participating in the workshop virtually, the chat feature was filled with great questions and insightful feedback on the presentation.

All in all, the workshop was successful and participants were encouraged to personally meet with coaches and volunteers on their own time to continue updating their resumes.

Participant Jaz Gutierrez shared, “Being a part of the resume workshop via hybrid mode was entertaining and interesting. I learned to have a bit more patience because we all learn at different paces. It was nice to have coaches involved to improve our resumes. A step-by-step action was in place and the instructor was phenomenal. There’s no place like home and that’s what being back at the JIT office felt like.”

We’re thrilled to be able to remain open, continue inviting participants like Jaz into our office, and be that network of support that takes youth to their next goal. 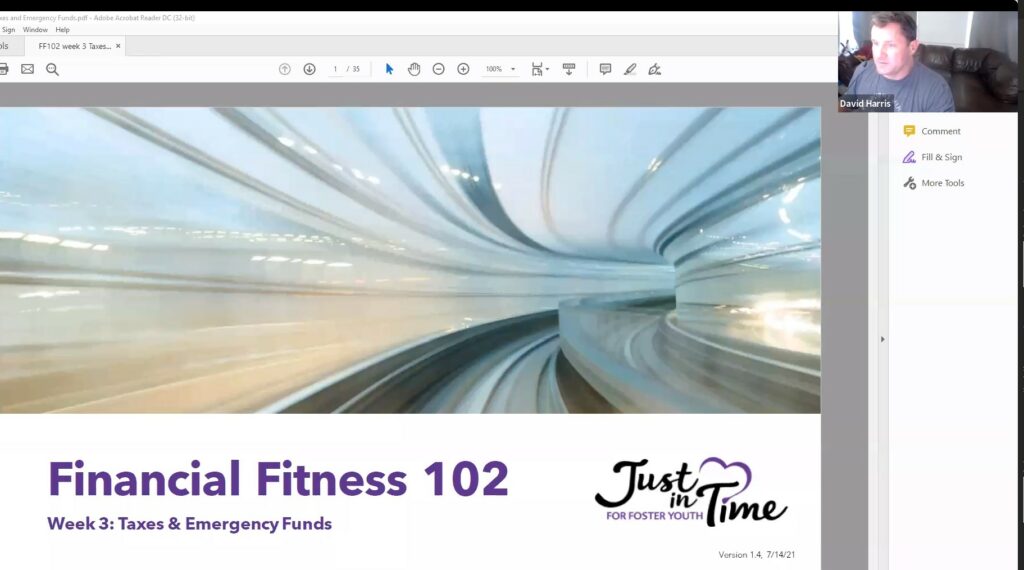 Financial Fitness 102: Last Monday we had our third FF 102 workshop titled “Taxes and Emergency Funds.”  Volunteer facilitator David Harris led the discussion around participants understanding where all the deductions on their paycheck go and strategies for maximizing their tax returns and understanding tax deductions. This was relevant for our participants because a lot of them are new to employment or are just starting their careers and have felt the pain of getting that first paycheck and seeing a large amount has been withheld for taxes. This helps bring clarity and a sense of understanding to where that money is going. Participants worked with their coaches in individual breakout rooms to dive into conversations about their take-home pay, how to file taxes, what a refund is, common tax deductions/credits, and developing strategies to build and maintain an adequate emergency fund. Emergency funds are a critical concept for participants because so many foster youth grow up in paycheck-to-paycheck situations that sustained a survival mindset that continues on to adulthood. Establishing a well-supported emergency fund enables participants to take control of their finances, relieves anxiety, and allows them to feel secure in their position knowing that when life throws an unexpected expense, they will have some funds to cover it without going into debt. In the survival mindset, emergencies can have devastating financial consequences that last for years and in a prepared/resilient mindset, emergencies are temporary setbacks that are learning opportunities participants can quickly recover from. This was a successful third workshop for our FF 102 cohort and also the halfway mark on their intensive six-week curriculum. We’re excited to keep up with our participants on their journeys and eventual graduation to Financial Fitness 103.

Financial Fitness 103: Last Tuesday, we had our FF 103 workshop “Budgeting and Goal Setting: Six Month Review.” Volunteer Paul Lamb facilitated the workshop which focused on behavioral finance — how individuals think and act with their money. This is a critical component of managing money effectively; in order to make good decisions and create healthy habits, you must first understand your own values, beliefs, and biases with money so that you can recognize and counteract them when working on making a positive behavioral change. Paul also reviewed the basics of budgeting, goal setting, and monitoring progress. Participants engaged in breakout rooms with coaches to discuss saving for their own personal balance sheet or for their own mental health, how saving makes them feel, how well they know their financial situation, and the personal impact of their financial decisions and economic changes such as inflation. Participants generally shared that they are acutely aware of prices for common household good going up which affects their tight budgets significantly. However, participants also shared that they feel better suited to handling upcoming challenges when they have a realistic budget and can save for the future. Being able to tie in their personal emotions with money allowed for deeper and more authentic conversations than simply looking a spreadsheets. The workshop was a great success and our participants emerged with a more intimate understanding of their finances, clear goals, and a community of support to help them get there.