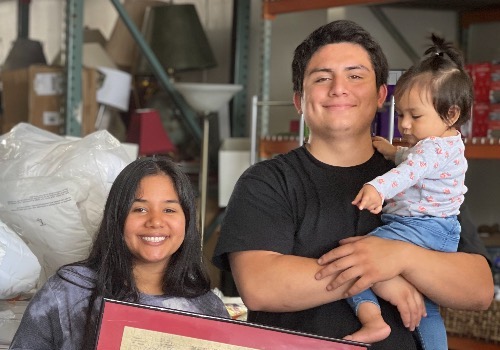 Growing up as a foster youth, Sebastian never felt he had a place to call home. He often found himself living with other people such as family members, often ones whom he wasn’t close with or he described as toxic in his life. That’s why it was such a milestone when he recently saved up enough to move into an apartment with his girlfriend and their one-year-old daughter.

However, Sebastian soon found himself overwhelmed with new expenses; he now had a place to live and raise his child but no furniture to make it into a home. He had a plan: start with basic necessities then slowly buy furniture and other home goods over the course of years. That plan would soon become accelerated when he found the Just in Time community!

Sebastian joined JIT for College Bound this May, where he also learned about the other services we offer. He immediately applied for My First Home and within a month, was having his own personal shopping day! All the furniture and necessities he planned to accumulate over the years suddenly became attainable now!

“It was a cool experience,” shared Sebastian. “I got a lot of stuff I wouldn’t be able to afford. The free furniture was enough, but having it delivered by volunteers was above and beyond my expectations!”

In addition to furniture, cleaning supplies, and other essentials, Sebastian also received décor, including a special framed Disney puzzle created by our partners from Step Up Foster Youth Mentors at the Rock Church.

When asked to describe his experience in one word, Sebastian said “Surprising,” adding that “It was a great experience. More than enough!”